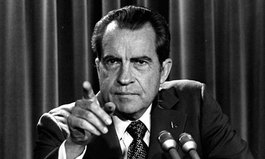 "But the question facing us today is: Now that we are in the war, what is the best way to end it?" 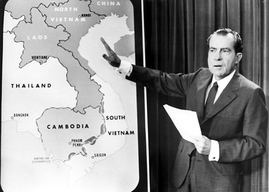 •Anti-war demonstrations became very popular in the U.S.
•President Nixon was elected in 1968 on a peace platform (Tricky Dicky)
•Nixon wanted to find a way out honourably
•Developed Vietnamization with help of Henry Kissinger and Henry Cabot-Lodge 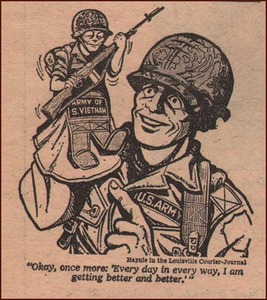 •The plan had a two track formula
•1.) Make the south well trained enough militarily that they could withstand the north on their own
•2.)  Strengthen the south’s government to attract a broader base

•American’s began to make their first withdrawals in Aug. 1969
•The air war increased
•B-52s dropped more bombs on North Vietnam than during all of WWII
•1971 almost entirely an air war
•1972 200,000 troops
•Jan. 1973 a cease fire is signed (Americans got their POWs back after 20 years of fighting)
•Aug. 1973 all U.S. forces out of Vietnam
•Spring 1975 all of south Vietnam falls to the north and becomes Communist
-Domino theory continues - Laos, Cambodia 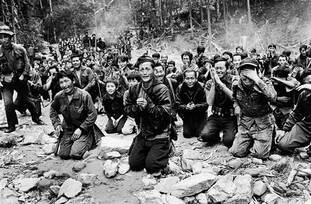 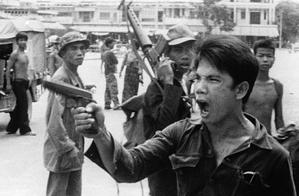 •The Cambodians were led by the Communist Khmer Rouge
•Led by an absolute dictator (Pol Pot)
•Massacred about 1 million people in 4 years and removed in 1979 by the Vietnamese (renamed Kampuchea for 10 years)
•U.N. moved in to help maintain order
•Becomes democratic in 1990’s

As President Nixon began to withdrawal the US from Vietnam, he introduced various plans to do this, one of which being Vietnamization. As more soldiers were withdrawn from Vietnam, an air war ensued as B-52's constantly dropped bombs over Vietnam.