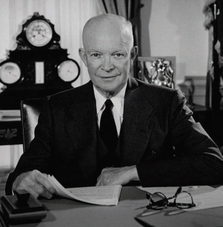 "Every gun that is made, every warship launched, every rocket fired, signifies, in the final sense, a theft from those who hunger a nd are not fed, those who are cold and are not clothed. The world in arms is not spending money alone. It is spending the sweat of its labourers, the genius of its scientists, the hopes of its children." 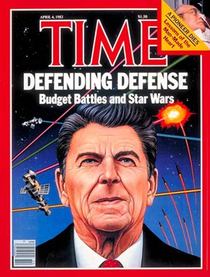 •The Strategic Defence Initiative (SDI) - Also known as “Star Wars”; wanted to have a defensive umbrella over the U.S. to shoot down incoming missiles from space
•Soviets could not afford to keep up with this kind of science
•The arms race would not fizzle out until Mikhail Gorbachev came to power in the USSR in 1985

•The USSR had a 3:2 advantage in sheer numbers
•New issue is how to deliver them
•Cruise missiles are placed in Europe by NATO
•‘Smart Weapons’ - planes, weapons and even tanks begin to be controlled by computer and are ‘guided’
-New Technology
-Reagan-omics - was to outspend the Soviet

As the arms race heated up between the US and the USSR, the need for defence became important. The US developed the Strategic Defence Initiative to shoot down oncoming missiles from space. At this period of time, smart weapons like guided planes were quickly advancing.