"Freedom prospers when religion is vibrant and the rule of law under God is acknowledged." 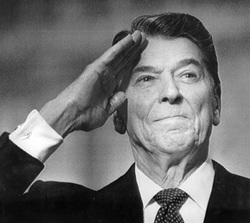 •40th U.S. President
•A former Hollywood actor
•Elected for a second term in 1984
•Saw the USSR as the ‘evil empire’ and wouldn’t negotiate with them for the first years of his Presidency
•Was much more hardline than the détente Presidents
•Increased military spending dramatically as part of the renewed arms race with the USSR

Ronald Reagan was elected as the 40th President of the United States after previously being a Hollywood actor. Reagan was much tougher than the Dente presidents and as a result, increased military spending dramatically.